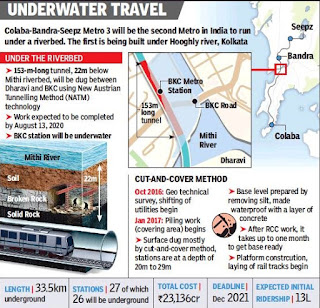 In a first for the city, the Mumbai Metro Rail Corporation, which is executing the Colaba-Bandra-Seepz Metro 3 corridor, started the challenging task of tunnelling 22 metres below Mithi river.

The 153-metre-long tunnel is being dug using the New Austrian Tunnelling Method between Dharavi and Bandra-Kurla Complex.

BKC station will also be underwater. The work is expected to be completed by August 13, 2020.

The proposed 33.5-km Metro 3 line will be the second Metro in the country to have tunnels under a riverbed. The first is being constructed in Kolkata under the Hooghly river.

“The BKC Metro station, that will come up below Mithi river, will have two island platforms instead of one island platform as is being constructed at the other 25 underground stations,” said S K Gupta, MMRC director (projects). “It will also have a reversal facility and a spare line for train operations.” BKC station will be a crucial intersection point as it is being planned as a three-line station with two main platforms and a cross-over line, which will connect to either side of the mainline. The cross-over line is being constructed using NATM.

MMRC had carried out an elaborate study and detailed planning before starting work on tunnelling below the water body. “The presence of soil and weak rock under the riverbed increase the risk of instability of the excavated opening before proper support is installed,” said Gupta. “Additionally, permeability of the geological material will define the amount of water ingress in the tunnel.”

To accomplish this feat of constructing a tunnel under a riverbed, MMRC officials said the layers of soil and broken rocks under the riverbed will be strengthened by grouting to reduce permeability and ingress of water. Also, an “umbrella” of steel bars will be created above the excavation area for safety and there will be a constant check on soil/rocks during excavation.

“We will instal steel bars almost horizontally above the roof of the tunnel through predrilled holes to support the excavation work,” explained Gupta.