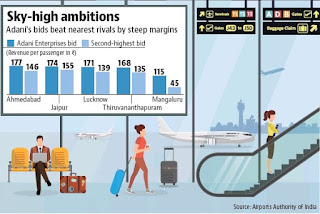 Conglomerate Adani Group has emerged the successful bidder for five of the six airports the government has decided to privatize in its latest round of airport privatization.

Financial bids for five airports, except Guwahati, were opened and Adani Enterprises emerged the winner by quoting the highest revenue per passenger for Ahmedabad, Jaipur, Lucknow, Thiruvananthapuram and Mangaluru airports.

Bids for Guwahati airport are expected to be opened on Tuesday.

The Adani Enterprises’ bids were far more aggressive than those of other bidders.

Adani Group’s experience in aviation is limited to owning an airstrip near its flagship port at Mundra in Gujarat, and an airline licence for Karnavati Aviation. To its advantage, prior experience in running an airport wasn’t a qualifying requirement in this bidding process.

The highest amount quoted by Adani was for the Ahmedabad airport, for which it agreed to give ₹177 per passenger to the AAI while the next highest bidder, a consortium of The National Investment and Infrastructure Fund and Zurich Airport International AG, quoted ₹146.

All the other airports privatized are also operating beyond capacity.

“The Adani Group is delighted on winning the bids that were invited by Airports Authority of India in December 2018 for the management of domestic air, ports under the public-private partnership model. The Indian aviation industry is a growing sector with the government’s continuing focus on creating world class airports,” an Adani spokesperson said in an e-mail.

This person added that the conglomerate would “scale up the infrastructure to bring these facilities on par with global standards.”

According to The International Air Transport Association India’s domestic market posted the fastest full-year domestic growth rate for the fourth consecutive year, with an 18.6% annual demand increase in 2018.

The aviation minister has already said the government will adopt the private model for new airports and also some operational ones.

In November, the cabinet approved the privatization of six operational airports saying the airport sector is the top contender among infrastructure sectors in terms of international interest.