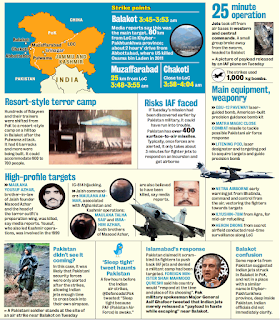 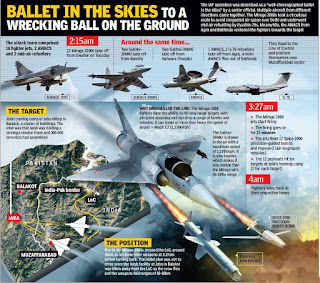 India took down the largest Jaish-e-Mohammad terror training camp in Pakistan in a meticulously planned early morning air raid on Tuesday, terming it a “non-military, preemptive” strike based on credible intelligence that terrorists based in the camp were being trained for another suicide bombing in India.

The strikes — India’s first such air raid into Pakistan since the 1971 war — targeted the Balakot training camp located in Khyber Pakhtunkhwa province, beyond Pakistan-occupied Kashmir. The camp was a busy location with terrorists congregating there after retreating from forward staging areas in anticipation of Indian action after the Pulwama terror attack in which 40 CRPF jawans were killed.

Declaring the strike as necessary to “fight the menace of terrorism”, foreign secretary Vijay Gokhale said a “very large number” of terrorists had been eliminated. Sources in the government estimated the casualties at over 300. “In an intelligence-led operation in the early hours of today (Tuesday), India struck the biggest training camp of JeM in Balakot. In this operation, a very large number of JeM terrorists, trainers, senior commanders and groups of jihadis who were being trained for fidayeen action were eliminated,” Gokhale said.

While a post-strike assessment is being carried out, the announcement of the air strikes has added a new dynamic to the Indo-Pak conflict in Kashmir that till now had been limited to ground raids, artillery exchanges and sniping across the Line of Control.

A dozen fighter jets were involved in the operation that saw the Dassault Mirage 2000 combat aircraft dropping SPICE-2000 precision bombs from along the LoC to strike targets at a range of over 60 km. The Mirages were backed by Su-30 MKI fighter jets that provided air support.

Those familiar with the details said that the strikes were carried out from just across the LoC, and that the jets did not need to go deep into Pakistan as long-range bombs were used. Pakistan has alleged that Indian fighter jets violated the LoC by “3-4 miles”.

Six buildings at the camp — run by Maulana Yousuf Azhar, also known as Ustad Ghouri, the brother-in-law of JeM chief Masood Azhar — were targeted by the Indian jets.

The Pakistani air force was alerted to the strike, but sources said it had no time to respond given the speed of the operation. They confirmed that while PAF jets did take off, they could not engage the Indian strike formation given its numerical superiority. Incidentally, Balakot is located within 60 km of Abbottabad, where US special forces gunned down Al Qaeda chief Osama bin Laden in a covert operation in 2011.

Two other locations at Chakoti and Muzaffarabad are also believed to have been hit in the strikes, but were not mentioned in the official statement by the Indian government.

By terming the action as ‘non-military’, India has sought to control a possible escalation by signalling that the targets were non-state actors and not the Pakistani armed forces. The Pakistani military has, however, claimed that there was no damage to infrastructure at Balakot and that the bombs fell on a mountainside.

The foreign secretary said the action was on the basis of precise intelligence and that the target was chosen specifically to avoid civilian casualties. “The facility is located in a thick forest on a hilltop, far away from any civilian presence,” Gokhale said.

India has asked Pakistan to dismantle all JeM camps and infrastructure, and to hold terrorists accountable for their acts.