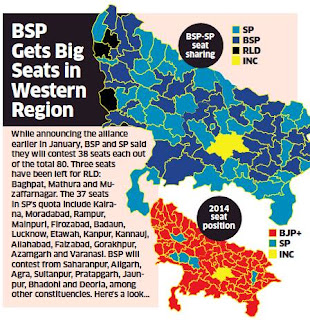 Stamping out any possibility of Congress being part of the opposition alliance in Uttar Pradesh, Bahujan Samaj Party and Samajwadi Party jointly released the list of seats from where the two partners will contest. Of 75 seats in the list, SP will be contesting 37, one less than its alliance partner BSP, after it gifted an extra seat from its quota to RLD. At the historic Mayawati-Akhilesh press conference on January 12, the alliance had already reserved two seats for the Jat-dominated party and spared two seats, Amethi and Rae Bareli, for the grand old party.

Samajwadi Party will be challenging Prime Minister Narendra Modi and home minister Rajnath Singh in the key constituencies of Varanasi and Lucknow. It has also retained Gorakhpur and Phulpur, where it defeated BJP in the 2018 byelections. Kairana, too, is in SP’s kitty, where BJP was drubbed in the bypolls by a joint opposition candidate who fought on an RLD ticket.

In the division of seats declared by the two parties, BSP and SP appear to have stuck to their bastions. While the Yadav strongholds will remain largely with SP, Jatav-dominated Bundelkhand has gone to BSP’s share. A chunk of SP’s share comprises over 10 seats, mostly in urban areas, which were won by Congress in the 2009 Lok Sabha polls — Moradabad, Ghaziabad, Ferozabad, Unnao, Kanpur, Jhansi, Barabanki, Faizabad and Kushinagar.

The two parties hammered out the seat-distribution blueprint by taking into account their performance in the 2009 polls rather than using the 2014 results as the yardstick.

BSP has zeroed in on most reserved seats, 10 against six given to SP. Bijnor, considered BSP chief Mayawati’s lucky seat, has been retained by the party. Also, Saharanpur, from where BSP founder Kanshi Ram once contested, is in BSP’s bag. Nagina, Agra, Bulandshahr, Shahjahanpur, Mohanlalganj and Lalganj are some other reserved seats from where BSP will contest.