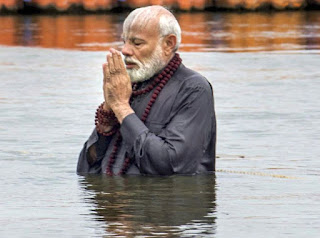 Prime Minister Narendra Modi signed off on the last episode of his monthly radio programme ‘Mann ki Baat’ before the Lok Sabha elections, expressing confidence that he would be back to renew the programme in May and looked forward to several years of conversations with the public.

On Sunday, the PM said healthy democratic traditions demanded that he discontinue ‘Mann ki Baat’ till the elections conclude, but made it clear that he expected to be back in office. “With the power of your blessings, once again I shall begin this series of conversations through ‘Mann ki Baat’… and shall keep doing ‘Mann ki Baat’ with you for years,” he said.

“In the next two months, we will be busy in the hurlyburly of the general elections. I myself will also be a candidate during this election. As a respect to healthy democratic traditions, the next episode of ‘Mann ki Baat’ will be broadcast on the last Sunday of the month of May. This means I shall take up our thoughts and ideas accumulated over the three months of March, April and entire May after the elections, with a new confidence,” the PM said. The decision to suspend the radio talk fits in with the expected announcement of Lok Sabha poll dates in the first week of March. In the 2014 election, polls were announced on March 5.