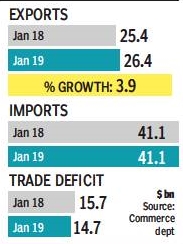 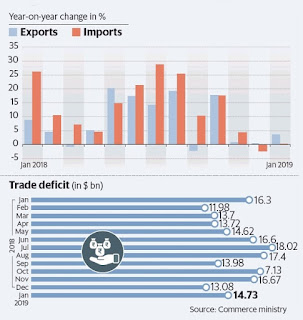 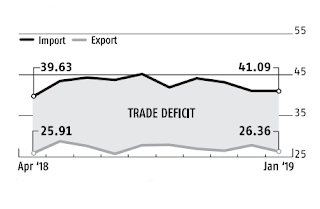 Exports grew less than 4% in January as demand for engineering goods, leather and gems & jewellery remained muted. But in what is emerging as a worrisome trend, imports too remained subdued. As a result, trade deficit narrowed to $14.7 billion.

Data released by the commerce department estimated exports at $26 billion in January, compared with $25.4 billion a year ago. Exports growth had remained almost flat in November and December 2018, although the government is hopeful of reporting record exports by March-end.

During April-January, exports rose 9.5% to around $272 billion, while imports were around $228 billion, resulting in a trade deficit of around $156 billion.

Although imports have cooled down, it may not be good news for industry that depends on imported raw material and inputs. Imports were flat even as gold shipments were up 38% to $2.3 billion in January, while oil imports were 3.6% higher at $11.2 billion.