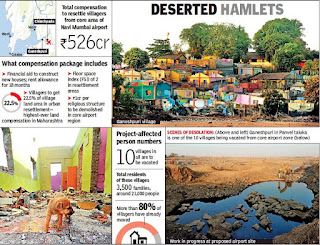 Ganeshpuri in Panvel taluka was once a bustling village. Today, it is eerily silent--all the villagers have packed up and left their ancestral homes to make way for the upcoming Navi Mumbai airport. Roofs of almost all the houses have been knocked down. Children’s doodles on the still-standing walls serve as reminders that these spaces were once inhabited.

Some distance from the villages the silence is replaced by the deafening noise of war zone-like heavy-duty earth movers and dumpers, which kick up dust and gravel to flatten the undulating land along the coastal zone and reclaim water bodies for the airport project.

The desolation is replicated in adjoining hamlets whose residents too have packed up and left. Most of the 10 villages in the way of the project have been emptied so far. When the evacuation process is complete, as many as 3,500 families comprising 21,000 people would have relocated.

A total of 2,260 hectares are required for the airport project at Panvel. The villagers will be rehabilitated in Ulwe in a new township creatively named Pushpak Nagar after the ancient India’s pushpak viman aircraft technology.

Cidco is offering a total compensation of Rs.526 crore for resettlement of the villagers, including financial aid to construct new houses and rent allowance for 18 months. The villagers will get 22.5% of the land area surrendered in urban resettlements—the highest-ever land compensation in Maharashtra.

Cidco PRO Priya Ratambe said, “So far, nearly 80% of the villagers had left the areas on the airport site before the January 15 deadline.” Residents of a few villages such as Chinchpada are still waiting for compensation issues to be ironed out.

Kamal Mhaskar (50), who vacated her Varcha Owale village home, has set up a makeshift tea stall at R-1 Block of Karanjade, an urban pocket 7 km from Panvel station. “Life is obviously different and a bit more difficult after moving out of our village. We are trying to adjust to the new settings and are not as excited as the government is about the various development projects that are coming up,” she said while serving tea for Rs.9 a glass.

On Monday, the erstwhile inhabitants of Varcha Owale began to celebrate the week-long Harinam Saptah for the first time outside their village. “We have night-long bhajan and kirtan sessions with traditional singers. We will celebrate it in a social community hall where we have temporarily installed Lord Ganesha’s idol,” said one Premnath Patil.

“Project-affected people had no option but to move out for the airport project. None of them were happy to leave their ancestral lands,” said T D Dapolkar (63), a grocer from Varcha Owale, who has continued to run his shop by the roadside, patronized by project workers for their daily provisions. “I will continue to run my shop for as long as I can here,” said Dapolkar.

Kiran Keni, who had earlier moved out of Chinchpada to rent a house in Karanjade, too, said his new location does not agree with him. “Both my daughters were down with dengue after we moved out of the village to start staying on rent in Sector 1 in Karanjade. In fact, at least 60 persons among the shifted villagers contracted dengue or malaria here after shifting out. Cidco showed a lot of haste in moving us out for the airport project.”

Keni further said the villagers should have been shifted out only after their new dwellings were fully constructed and ready. “At present, all are living on rent at scattered places; they all miss their villages. One aged woman from Chinchpada, Nagibai Patil, used to easily roam anywhere in the village barefoot but nothing had happened to her health there. After shifting out to Karanjade, she died of an ailment.”

While local village deities have been relocated to new sites, the temple construction is yet to be completed. There is a natural cave temple for Goddess Keru Mata at Waghili Wada. Locals have warned against its demolition. A lamp is still lit here every day.