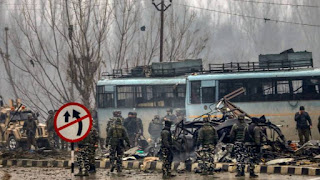 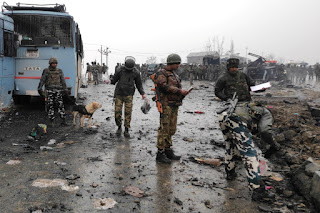 A Kashmiri suicide bomber rammed an explosive-laden vehicle into a Central Reserve Police Force convoy, killing 44 soldiers and injuring a dozen others. This is the deadliest attack seen in 29 years of terrorism that has marred the restive state.

This is the second major fidayeen attack after the attack on September 18, 2016, when Pakistani militants stormed a Uri brigade headquarters and killed 19 soldiers.

Thursday’s incident took place at 3.15 pm when the 78-vehicle convoy, carrying 2,547 men, was going to Srinagar from Jammu. As it was passing Latoomode at Lethpora, a vehicle fitted with over 250 kg of explosives rammed into a bus. Witness said the impact was so powerful that the blast could be heard within a five km-radius, and vehicle and body parts were thrown 400 meters away.

The area is dotted with shops selling saffron and dry fruits. Panic gripped the area immediately and shopkeepers downed their shutters to escape to the safety of their homes.

Inputs received by the agencies suggested the JeM had been rebuilding its network in south Kashmir over the last three months.

Last year, security forces had claimed a big win after Mohammad Usman, believed to be the head of the module behind sniper attacks on forces in the Valley, was killed by security men. Usman was the nephew of Moulana Masood Azhar, the chief of Jaish-e-Mohammad.

Those tracking developments in the state said a suicide car attack was a sign of things crumbling down. In a recent meeting within the security forces, the threat posed by suicide attacks was discussed based on recent intelligence inputs. However, there is no viable combat option to such threats so far, sources said.

“We have never received as many alerts about a suicide strike as we have been getting for the past 10 days. We understand that the groups are quite desperate to strike back after we incurred heavy losses on them throughout last year, but the fact that they’re planning on carrying out multiple suicide strikes is a much bigger security challenge,” said a highly placed source. 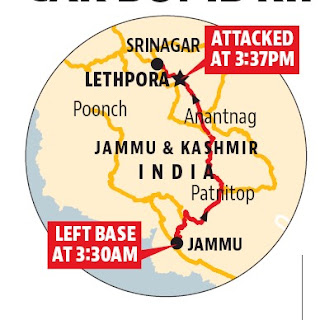