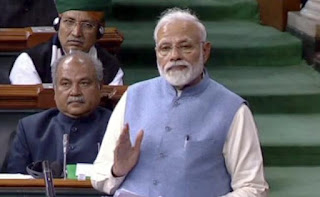 Using his last speech in the 16th Lok Sabha to drive home benefits of a majority government, PM Narendra Modi said security in numbers led to distinct advantages on the international stage and faster decision making as compared to a disparate “gathbandhan”.

Claiming that India’s stature at the global level had reached an all-time high in the past five years, Modi said this was possible because there was a full majority and stable government in contrast to the preceding 30 years, the phase of coalitions when the leadership lacked decisiveness.

“India is being heard with seriousness at the global level. Sometimes I hear, and there is a misconception that it was in the regime of Modi and Sushma that India’s reputation has soared globally. But reality is a bit different. The sole reason is a full majority government. The world acknowledges a majority government,” Modi said.

Recalling the years when there were coalition governments, the PM said, “Image of the country suffered severe dents in 30 years before us only because majority was lacking. After 30 years, we got full majority in 2014 and whenever I met any global leader, he knew that I had the mandate... Credit for this doesn’t go to Modi and Sushmaji but to the 2014 mandate of 125 crore people of the country.”

Modi’s insistence on virtues of a majority government draws the party’s key poll agenda to seek votes on the plank of stability, which, ruling party leaders have maintained, helped them take tough decisions like surgical strikes and reforms in the tax regime. It also mirrors efforts to whip up fears of a disjointed opposition alliance. The party has already floated the slogan of “majboot sarkar vs majboor sarkar” to cast aspersions on the opposition’s alliance bid.

The PM took a few more potshots at Rahul, saying, “We used to hear that an earthquake will occur. Five years of this House are coming to an end but we did not see any earthquake.” He was referring to Rahul’s comments promising a major revelation in Lok Sabha.

Modi also referred, in a veiled manner, to raking up of the Rafale deal by Rahul and said, “Kuch hawai jahaz bhi udaye gaye (some planes were also flown).”