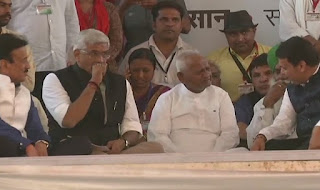 After seven days, social activist Anna Hazare ended his indefinite fast following a seven-hour-long discussion with CM Devendra Fadnavis, who assured the 81-year-old that all his demands on Lokpal and Lokayukta would be met in a time bound manner.

Hazare said the government had offered a concrete plan to resolve issues regarding Lokpal and Lokayukta and addressed concerns regarding farmers.

In the afternoon, Fadnavis arrived in Ralegaon Siddhi for talks. He was accompanied by Union agriculture minister Radha Mohan Singh, Union minister of state for defence Subhash Bhamre and state water resources minister Girish Mahajan. The CM said they had given Hazare a letter from the PMO on each of his demands. “The search committee for Lokpal will meet on February 13. The SC has also given some guidelines and steps will be taken,” he said. Fadnavis said a joint committee, consisting of members suggested by Hazare, would prepare a new law for Lokayukta in the state. “The draft Act will be presented during the assembly’s budget session. Hazare wants it to be a model Act for the entire country,” he said. For farm issues, a panel headed by the union agriculture minister will be formed. “Sompal Shastri (ex-agriculture minister) will be Hazare’s representative on it,” he said.

But even as the fast was on and as it ended, talk swirled around about how Hazare’s unpredictable nature, absence of a core team to handle negotiations and his image of being pro-RSS-Modi have led to a dwindling response from the public. While Anna, a man with no bank balance, property or family, drew huge support during his Lokpal stir in 2011 in Delhi, this time, he had support only from co-villagers. Opposition parties too kept away.

Former aides like Delhi CM Arvind Kejriwal didn’t say a word. Fadnavis visited Hazare on Tuesday; Mahajan was the sole interlocutor earlier. Hazare’s 2003 fast had forced four state ministers to quit; his stirs led to enactment of the RTI Act in Maharashtra. Activists like G P Pradhan, Baba Adhav and Govind Shroff stood by him in the pre-2011 phase, and in 2011, Kejriwal, Kiran Bedi and Medha Patkar became part of his core team. But they all left, some to join politics and others because they could no longer stand his “unpredictability and lack of flexibility.”

The last to leave was Vishwambhar Choudhary. “Anna’s March 2018 stir in Delhi was a disaster. There was no strategy, no planning, no clarity on demands. Earlier, he had a core committee and a process for holding negotiations. Now it is only Anna and the government who do the talking,” he said.

Choudhary feels overkill of the satyagraha principle and fasting (19 times) has also worked against Hazare.