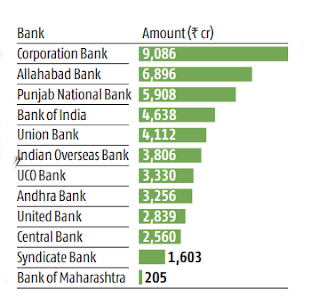 The government approved the infusion of Rs.48,239 crore in 12 public sector banks in the current financial year to ensure that the lenders are able to maintain regulatory capital requirements, step up lending and boost overall growth. Rajeev Kumar, secretary, department of financial services, said with this latest infusion of capital, the government has now provided Rs.1,00,958 crore out of the Rs.1.06-lakh-crore bank recapitalisation plan.

Corporation Bank emerged as the biggest beneficiary of the latest round of capital infusion with Rs.9,086 crore, followed by Allahabad Bank (Rs.6,896 crore).

Kumar said the aim of the recapitalisation plan is to strengthen better performing banks (including Allahabad Bank and Corporation Bank) under prompt corrective action so that they can come out of this restriction. The RBI had unveiled the PCA framework in the aftermath of soaring bad loans and that was meant to serve as a watch list for weak banks on which lending restrictions were imposed.

Last month, the RBI lifted curbs on three out of 11 public sector banks. Eight other PSBs — Allahabad Bank, United Bank of India, Corporation Bank, IDBI Bank, UCO Bank, Central Bank of India, Indian Overseas Bank and Dena Bank — are still under PCA, which also imposes curbs on expansion activities, among a number of other restrictions, to help them get back to fiscal health.

Kumar said the plan is also to ensure that state-run lenders, which have emerged out of the PCA, remain above the triggers and help others such as Indian Overseas Bank, Central Bank, United Bank and UCO Bank meet minimum regulatory capital requirements. He added that the remaining Rs.5,000 crore may be used as a buffer for any contingency or growth capital for Bank of Baroda, which will be merged with Dena Bank and Vijaya Bank.

In December, the government had injected Rs.28,615 crore into seven banks through recapitalisation bonds.