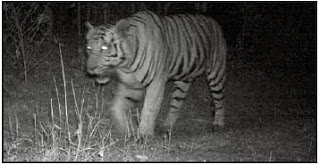 It’s official. A tiger has indeed entered the lion’s den in Gujarat, which is home to the Asiatic lion’s last abode. Six days after a school teacher clicked a tiger on his mobile phone, the striped big cat was captured on Tuesday morning in the advanced night-vision cameras.

“Our cameras spotted the tiger in forest area 2 km away from Santrampur in Panchmahal district. The tiger is an adult, aged 5-7 years with pugmarks of 15-17cm diameter,” said RM Parmar, deputy conservator forest, Mahisagar district. The return of the big cat to Gujarat after 27 years — it was last spotted in Dangs in 1992 — brought elation in the wildlife circuit. “With the tiger’s sighting, Gujarat is now the only state in the country to have the lion, tiger and leopard,” said principal chief conservator of forest (wildlife) AK Saxena.

The PCCF said that the department is keeping a close watch on the tiger’s movement to ascertain if it is a guest from MP or Maharashtra or is a permanent resident.