Priyanka makes her debut in UP battlefield with a mega roadshow 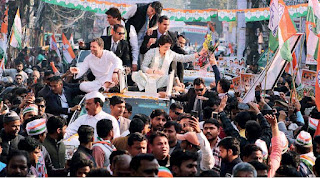 Making her political debut as AICC general secretary, Priyanka Gandhi started her Uttar Pradesh roadshow, with people cheering as she rode in an open truck through Lucknow.

Being seen as the launch of party’s campaign in the state, the 25-km roadshow from the airport to the party headquarters also included Congress president Rahul Gandhi and in-charge of the western region, Jyotiraditya Scindia. “Come, let’s build a new future, new politics with me. Thank you,” Priyanka said in her message to the people ahead of the visit.

Besides workers of other front organisations of the party, some Congress workers – said to be members of Priyanka sena, a little known outfit – were seen wearing pink Tshirts with her photograph. Some posters showed Priyanka in ‘Durga Mata’ avatar riding on a lion. “Maa Durga ka roop behen Priyankaji (sister Priyankaji is Maa Durga’s incarnation) said the poster, while others highlighted her resemblance to Indira Gandhi.

No stranger to such roadshows with her brother, Priyanka is seen campaigning for the first time outside the Gandhi family constituencies of Amethi and Raebareli and her political acumen and connect with the public is said to be at test for the first time. According to sources, though she is being pitched as a big draw with her charisma, her ‘rescue Congress’ mission remains a daunting task in the state where the party has been pushed to the margins with decades of caste politics.

While technocrat-turned-politician Sam Pitroda said Priyanka will complement Rahul Gandhi’s efforts in winning over young voters, Neeraj Shekhar, a Samajwadi Party MP and son of former late prime minister Chandra Shekhar, said that her entry into active politics will not impact the SP-BSP alliance in UP, where the BJP has been rattled because of the coming together of the two parties.

Shiromani Akali Dal’s Bikram Singh Majithia said that Rahul’s “political obituary” had been written with the launch of his sister’s entry into active politics.

Meanwhile, Robert Vadra, in a social media post on Monday, urged people for the safety of his wife, saying the political atmosphere is “vindictive and vicious”.