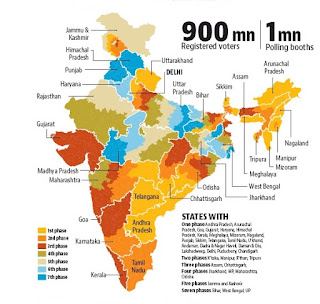 The Election Commission announced seven-phase polls to the Lok Sabha and four state assemblies, to be held from April 11 to May 19. Counting for all the constituencies will be held on May 23.

Assembly polls will be held in Odisha, Andhra Pradesh, Sikkim and Arunachal Pradesh. Jammu and Kashmir, which will complete six months of dissolution of the assembly in May, was left out. Chief election commissioner Sunil Arora attributed the delayed assembly poll in J&K to the security situation in the state in view of which the J&K government and home ministry had expressed their inability to hold simultaneous polls. Other factors included limited availability of central forces and the difficulty in arranging security for a large number of candidates in simultaneous polls.

As per the schedule announced by Arora, who was flanked by election commissioners Ashok Lavasa and Sushil Chandra at Sunday’s press conference, polling will be spread across seven phases on April 11, 18, 23, 29, May 6, 12 and 19. While 21 states and Union Territories will vote in a single phase, Karnataka, Manipur, Rajasthan and Tripura will have two-phase polls. Assam and Chhattisgarh will poll in three phases; Jharkhand, MP, Maharashtra and Odisha in four phases; J&K in five phases and UP, Bihar and West Bengal in all seven phases.

The model code of conduct kicked in with declaration of polls. General election 2019 will have 100% deployment of VVPATs. It will continue with the practice of matching EVM count with paper trail in one polling station each in every assembly segment, though the CEC did not rule out raising the tally if the Indian Statistical Institute, which is looking into the possibility, recommends the same ahead of counting day.

As many as 89.88 crore electors, including 1.59 crore new voters aged 18-19 years, are registered to vote though this number is likely to go up since additions to the electoral rolls can be made till the last day of filing of nomination, even though only applications. In addition, nearly 16.62 lakh have enrolled as service voters. In the 2014 polls, 81.45 crore voters were enrolled. As per EC sources, there will be 10,35,932 polling stations spread over 4.36 lakh locations across the country this time.

The poll announcement has set in motion a highly-anticipated contest which is shaping up to be a ‘Modi versus Rest’ showdown. The recent Pulwama attack and IAF air strikes on a Jaish camp in Pakistan have added a new dimension to the polls as the military action is seen to boost the Modi government’s credentials, though the challenge for BJP is to sustain the high till voting day and factor in possible escalation.

Declaration of polls is expected to spur the opposition to look for up any possible alliances to take on Modi and BJP. The key alliances in UP and Karnataka are a major challenge for BJP as are strong regional leaders like Mamata Banerjee, Naveen Patnaik, K Chandrasekhar Rao, Mayawati and Akhilesh Yadav. A key determinant will also be ‘BJP versus Congress’ battles in states like Rajasthan, MP, Chhattisgarh, Himachal Pradesh, Uttarakhand, Gujarat and Maharashtra. Congress scored victories in some of these states recently and it remains to be seen if a national election fought on ‘for-or-against-Modi’ lines will allow BJP to regain the advantage.