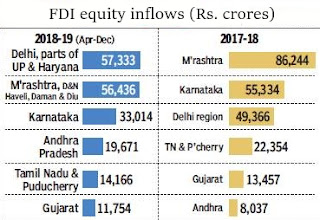 A report by Department of Industrial Policy and Promotion mentions that the ‘New Delhi region’, covering the national capital and parts of UP and Haryana (which is broadly contiguous with NCR), received FDI equity inflows of Rs.57,333 crore ($8.3 billion) in the first nine months of 2018-19. FDI equity inflows aggregated about $33.5 billion in the first nine months of fiscal year 2018-19, a 7% decline compared with the same period in the previous fiscal year.

States that have been laggards in the past in attracting FDI, are also catching up fast. Andhra Pradesh, West Bengal, Kerala, Rajasthan, Punjab, Haryana and Himachal Pradesh collectively received nearly 15% of FDI equity inflows in the first nine months of FY2018-19.

They had only a 4% collective share in the comparable period the previous year. “Investments in emerging economies were lower partly due to uncertainty in the global markets,” said Rucha Ranadive, economist, CARE Ratings. “Foreign investments in emerging markets have mainly been adversely impacted by global headwinds such as the slowdown in the global economy, trade war between the US and China, concerns over Brexit, tightening of monetary policies by major global central banks, rupee depreciation and geo-political tensions among others.”