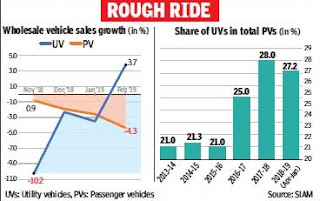 Is the SUV craze fading? After rising steadily for five years, sales of utility and crossover vehicles have fallen sharply since November. And though overall utility vehicle wholesales have rebounded in February, it is on the back of improved MPV sales rather than SUV volumes, which remain negative. The UV share in overall passenger vehicle sales this financial year is also down marginally. In fact, segment leaders Suzuki Vitara Brezza and Hyundai Creta were among the hardest hit in December.

In February, however, total UV (including SUV and MPV) wholesales rebounded on the back of aggressive billing by companies before the year-end and good performance by the MPV segment. SIAM data shows total UV sales were up 3.7% in February, while cars were down 4.3%. For April-February, cars were up nearly 3%, while total UVs (including MPVs) were up 2%.

Industry experts say both the compact and the mid-sized SUV segments are affected. These have the maximum models and account for the bulk of sales. In the compact SUV segment, sales were down by 5% — to 1,44,203 from 1,51,141 units — in the November-February period. In the mid-sized segment (Hyundai Tucson, Jeep Compass, etc), sales fell 19% to 10,105 units from 12,618 in the period. Sales of medium premium SUVs (Toyota Fortuner, Ford Endeavour, etc) were down 9%, to 10,580 units from 11,656 units. However, premium SUVs, such as Land Cruiser and Prado, sold 37 units as against 30 earlier.

Other experts said people may be delaying buying to wait for BS-6-compliant vehicles. Also, SUVs, which mostly have diesel engines, may be looking less attractive because fuel prices are again rising and diesel is inching closer to petrol.