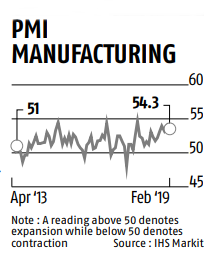 The Nikkei India Manufacturing Purchasing Managers' Index rose to 54.3 in February, from 53.9 in January, amid a robust improvement in business conditions.

This is the 19th consecutive month that the manufacturing PMI remained above the 50-point mark. In PMI parlance, a print above 50 means expansion, while a score below that denotes contraction.

According to the survey, the February data reflected strongest improvement in business conditions since December 2017, sharpest rise in factory orders for 28 months and underpins faster increases in production and employment.

It was noted that the upturn in employment was one of the best seen for six-and-a-half years, as goods producers sought to expand output capacities to meet strengthening demand from both domestic and external sources.

On the inflation front, rates of both input cost and output charge inflation remained subdued by historical standards, despite picking up from January.

According to experts, the signs of easing inflationary pressures indicate that the Reserve Bank of India is likely to adopt an accommodative monetary policy stance.

The next meeting of RBI's Monetary Policy Committee is scheduled on April 2-4.

For FY19, IHS Markit has revised higher its GDP growth forecast, from 7.0 per cent to 7.1 per cent, amid the announcement of fiscal stimulus for the new interim budget and the policy rate cut announced in February.

India's economic growth slipped to a 5-quarter low of 6.6 per cent in October-December period of 2018-19, mainly due to poor performance of farm, mining and manufacturing sectors, official data showed Thursday.

The Central Statistics Office, which released the national account data for the third quarter, also revised downwards the growth estimate for the full fiscal (2018-19) to 7 per cent from 7.2 per cent.