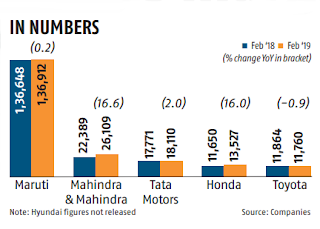 Wholesale despatches of automobiles across segments in February remained subdued as vehicle manufacturers cut production amid a slump in overall economic activity.

Passenger vehicle sales of major manufacturers were almost flat or declined during the month while those of commercial vehicles fell because of a lack of credit and new axle norms.

Maruti Suzuki India Ltd, the country’s largest passenger vehicle manufacturer, reported a 0.9% year-on-year growth in sales to 136,912 units. This is the third straight month in which the Maruti Suzuki India’s vehicle production growth has stayed flat.

Mumbai-based Tata Motors Ltd also reported a meagre 2% year-on-year increase in sales to 18,110 units, while Honda Cars India Ltd reported a 16% y-o-y growth in despatches to 13,527 units, but from a very low base.

Toyota Kirloskar Motor India Ltd also reported a 0.87% decline in sales to 11,760 units during the month.

Among the top four passenger vehicle manufacturers, only Mahindra and Mahindra managed to grow vehicle despatches by double digits as sales grew by 17% to 26,109 units because of the launch of its new compact utility vehicle XUV300.

In the commercial vehicle segment, sales continue to remain muted as financing options remain limited for fleet owners, after the liquidity crisis in non-banking financial companies and the introduction of new axle norms for heavy and medium trucks.

The biggest commercial vehicle manufacturer in the country, Tata Motors, reported a 5% drop in sales to 39,111 units, while Ashok Leyland, the second largest manufacturer, saw volumes increase by just 1% to 17,352 units.