India is ‘in a heightened state of readiness’ 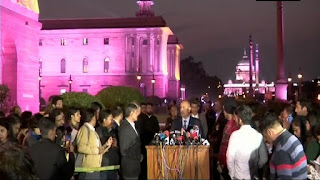 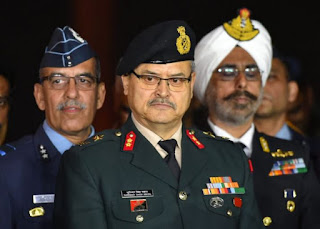 After Pakistan Prime Minister Imran Khan announced Wing Commander Abhinandan Varthaman’s release as a “gesture of peace”, top officials from the country’s three armed forces - the Army, Navy and the Air Force – in a joint presser, maintained that the defence forces are in “a heightened state of readiness” for any exigencies along the Line of Control and the International Border. The officials pointed out that Varthaman’s release is being read only as “a gesture in consonance with the Geneva Convention” and once he is back a “comment will be made on what Imran Khan and Pakistan have said.”

Even as de-escalation on India’s part seemed unlikely, they presented evidence of Pakistan’s aggression – a cover of AMRAAM (American Long Range Air-to-Air Missiles) missile fired from a Pakistani F-16 aircraft found near the LoC after it violated Indian airspace to “target our military installations” on February 27.

“Pakistan said no F-16s were used in this operation and no Pakistani plane was downed by Indian Air Force. Pakistan is trying to hide this fact. Also, parts of the missile which is carried only on the F-16s in Pakistan Air Force were recovered east of Rajouri within the Indian territory. Therefore, the fact remains that one F-16 of PAF was shot down by an IAF MiG-21 Bison aircraft,” Air Vice Marshal RGK Kapoor told reporters in the late evening briefing at South Block.

The Ministry of Defence was slated to brief the media around 5 pm but with Pakistan PM’s announcement of Varthaman’s release, the briefing was postponed as the Ministry reworked its official stand.

Kapoor accused Pakistan of ‘many factually incorrect statements’ and ‘blatant disinformation’ that two IAF aircraft were shot down by Pakistan and three pilots were downed. “This figure was later revised downwards to two IAF aircraft and two pilots. The fact, however, is that the Indian Army units had reported citing two parachutes falling in PoJ&K which were of two F-16 pilots shot by the IAF MiG-21 Bison. Pakistan later in the evening changed its statement to say that one Indian pilot was in their custody,” he said.

Pakistan had denied that F-16 was part of the operation as any such admission would violate the US sale conditions of not letting Pakistan use F-16s in an offensive role.

Elaborating on the events that led to the capture of IAF pilot Wing Commander Abhinandan Vardhaman, Kapoor said that on February 27 at 10 am, IAF radars detected a large package of PAF aircraft heading towards Indian territory near Jhangar as they breached the Indian airspace west of Rajouri in Sunderbani area. They were observed to be at various levels and Indian Air Force fighters including MiG 21 Bison, Su-30 MKI, Mirage-2000 were tasked to intercept them.

“Although PAF bombs have fallen in Indian Army formation compounds, they were unable to cause any damage to our military installations. In the aerial combat that ensued, one F-16 of PAF was shot down by an IAF MiG-21 Bison. The F-16 crashed and fell across the LoC in PoJ&K… The IAF lost one MiG-21 in the aerial engagement and though the pilot (Varthaman) ejected safely his parachute drifted into Pakistan Occupied J&K where he was taken into custody by Pakistan Army,” Kapoor summarised.

The senior defence personnel maintained that India will continue to keep its guard up and on all three fronts – the Navy, the Army and the Air Force – is in a ‘high state of readiness.’ Kapoor said that though an exact assessment of the damage done on the terrorist training camp in Balakot by the Indian Air Force on February 26 is yet to be made and the number of casualties is still unaccounted, the intended targets were successfully brought down.

“There is fairly credible evidence that proves there was damage to the camps. It will be premature to say what is the number of casualties. Whatever we intended to destroy, we have managed,” the senior IAF officer said.

Army Major General Surendra Singh Mahal said that in response to the counter-terrorist strike by the Indian Air Force on Tuesday, Pakistan Army first resorted to unprovoked ceasefire violations in Sunderbani, Bhimbar Gali, Naushera and Krishna Ghati sectors that evening from 5 pm and again during the night. “This was responded to by the Indian Army in a befitting and appropriate manner…Pakistan Air Force attempted to target military establishments in J&K, specifically a Brigade and a Battalion headquarter, forward defences, and a Logistical installation.”

These, too, were reportedly foiled due to the “high level of preparedness along the LoC”.

Mahal said that the Army is maintaining strict vigil along the LoC and the International Border sector. “Our ground-based air defence weapon systems have been put on alert all along the LoC and some parts of the International Border. Mechanised formations too have been placed on standby,” Mahal said. “Despite the present turn of events, the Indian Army is committed to maintaining peace and stability in the region and will continue to act against agencies who harbour inimical designs against India and citizens of our country.”

On the Naval front, Rear Admiral Dalbir Singh Gujral said that the Indian Navy is deployed in ‘high state of readiness and remains poised in all the three dimensions – on surface, undersea and in air – to deter, prevent and defeat any misadventure by Pakistan.