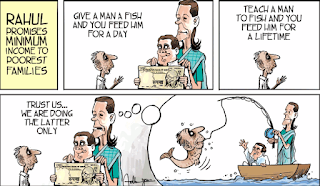 Congress president Rahul Gandhi promised that his party would, if it comes to power, guarantee an income of at least ₹12,000 a month for India’s poorest families by giving them ₹6,000 a month. The head of the party’s data analytics department Praveen Chakravarty explained the provenance of the ₹12,000 number by pointing out that data shows that India’s poorest earn between ₹5,000 and ₹6,000 a month.

It will cost ₹3.6 lakh crore, around 2% of India’s GDP, but Gandhi insisted that it was fiscally prudent.

“Remember the number… Congress guarantees 20% of India’s poor will make at least ₹72,000 annually,” Gandhi said after a CWC meeting that approved the party’s draft manifesto, to be released on April 2.