Hyderabad, Pune most liveable for expats 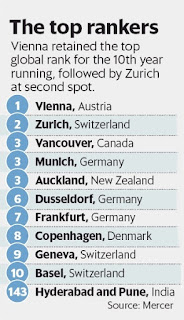 Hyderabad and Pune continue to be the most liveable cities in India for expatriates, a Mercer survey found, even though their overall global ranking remains a lowly 143.

According to Mercer’s 21st annual Quality of Living Rankings, the two cities are followed by Bengaluru (149), Mumbai (154) and New Delhi (162), whose rankings remained unchanged from last year. Mercer’s survey provides assessment for more than 450 cities; this ranking is for 231 of these cities.

Vienna retained the top rank for the 10th year running, followed by Zurich at second spot. In joint third place are Auckland, Munich and Vancouver. Luxembourg was the safest city in the world. In 105th place, Chennai ranks as the Asia-Pacific region’s safest city, while Karachi (226) is the least safe.