There’s Optimism In The Air, But Dissatisfaction Too 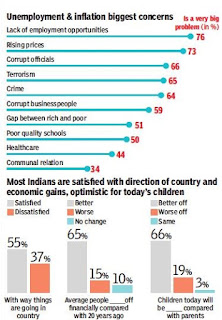 In the run-up to the 2019 elections, most Indians seem optimistic about the direction in which the country is going, despite persistent concerns about unemployment, according to a newly released sampling of public opinion in India by the US-based Pew Research Centre. However, a majority of Indians express growing concern about terror and the threat posed by Pakistan.

The Pew survey was conducted among 2,521 respondents in India from May 23 to July 23, 2018. Roughly two-thirds (65%) say the financial situation of the average Indian is better today than it was 20 years ago. Only 15% say things are worse. But there are signs of public dissatisfaction — 66% believe their children would be better off than them, down a full 10% since 2017. Even the number of people satisfied about the trajectory of the country (55%) is down 15% from 2017.

Most Indians think Pakistan is a threat to the country. “When asked how serious of a danger Pakistan poses for India, about three-quarters in India (76%) say Pakistan is a threat, including 63% who say it is a very serious threat.” A majority of Indians (55%) currently see the situation in Kashmir as a “very big” problem. Asked how this issue has changed over the past five years, more than half (53%) say circumstances in Kashmir have become worse.

The study says: “Lack of employment opportunities is seen by the public as India’s biggest challenge, with 76% of adults saying it is a very big problem — little changed over the past year. About 73% believed that rising prices is a very big problem (despite inflation being largely under control in the past few years).

“About two-thirds of the public says corrupt officials (66%), terrorism (65%) and crime (64%) are very big problems. In each case, such concern is down significantly from 2017 — by 20 percentage points in the case of crime, 11 points for terrorism and 8 points regarding officials’ corruption.”

Indians continue to feel personally unsafe. More than half (54%) of Indians say the statement “most people live in areas where it is dangerous to walk around at night” describes India well. Inequality, pollution and poor healthcare remain concerns but the study notes these are down since 2017. Despite official data pointing to higher incidence of communal violence since 2014, “only about a third of Indians (34%) see this as a very big problem facing the country”.

The study shows that when asked whether India has done better or worse on the various challenges facing it in the past five years, a time frame that largely encompasses the Modi government’s term, few voice a positive judgment. “Just one-in-five (21%) say job opportunities have gotten better, while 67% think things have gotten worse (including 47% who say much worse),” says the study.