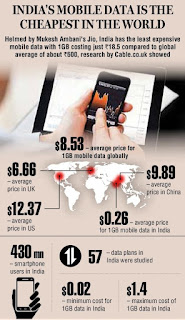 A large data-hungry base of smartphone users and a fierce price war between the country’s telcos has made India home to the cheapest mobile data price in the world.

One gigabyte of data costs $0.26 in India, compared to an average $6.66 in the UK and $12.37 in the US, finds a global analysis of mobile data prices by UK-based price comparison portal Cable. It compared data from 6,313 mobile data plans in 230 countries between October and November 2018 for the study.

For instance, there is a 97% difference in the price of 1GB of data between India and the US, while the gap in the 2018 edition of the Big Mac index (a quirky measure of purchasing power parity between nations using the price of McDonald’s Big Mac burgers) between the two countries is far narrower at 54%.

Asia makes up half of the top 20 cheapest mobile data prices in the world, with the average price of 1GB less than a dollar in Sri Lanka, Mongolia, Myanmar and Bangladesh. On the other hand, Zimbabwe is the most expensive country for mobile data as 1GB there costs $75.2, the survey said.

Without specifying why India ranks first, the study said the cheapest countries either have “excellent mobile and fixed broadband infrastructure”, or have a large user base reliant on mobile data. The large cost differential for mobile internet between India and other countries is primarily driven by a crowded and competitive telecom sector and is not just a factor of purchasing power.