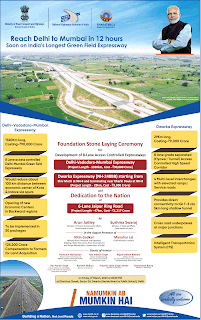 The Centre kicked off work on two expressways costing around Rs.1 lakh crore, one providing a new link from Delhi to Mumbai and the other connecting Dwarka with Gurgaon.

While NHAI created a record of sorts starting the work on the 1,320 km Delhi-Mumbai Expressway in less than a year after highway minister Nitin Gadkari had first announced it in Gurgaon (April 17), the construction of Dwarka Expressway officially started 12 years after it was first approved by Haryana government in 2007. Haryana had handed over the road to NHAI two years back after it had failed to build the stretch.

The foundation stones for the projects were laid by Union ministers Arun Jaitley, Sushma Swaraj and Nitin Gadkari at Dwarka. While Delhi-Mumbai expressway is scheduled for completion in the first quarter of 2022, the progress of Dwarka Expressway will depend on how quickly Delhi government gives permission for transplantation and felling of remaining trees. Jaitely praised Gadkari for pushing the daily highway construction to 29 km and making India the biggest highway builder in the world.