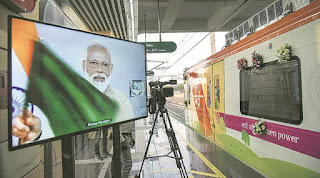 Prime Minister Narendra Modi inaugurated a 13.5-km stretch of phase one of the Nagpur Metro train service in Nagpur, making it the second city in Maharashtra after Mumbai to get a Metro Rail. In his through video-conferenced speech, Modi claimed that his government has expanded Metro connectivity in the country by 400 km since 2014.

Modi recalled he had laid the foundation stone of the Nagpur Metro in 2014 and was happy to launch its first phase.

The Nagpur Metro, that started construction work in June 2015, consists of two corridors with a total length of 38 km. The two corridors will have 38 stations, two depots and a fleet of 69 Metro cars, including a special “nari shakti” women’s coach in each train.

Speaking on the occasion, chief minister Devendra Fadnavis informed that the Nagpur Metro would be the greenest metro in the country with 65% of its electricity consumption from solar energy. He also informed that a new airport would be developed in Nagpur. “The government has entrusted the job to develop an international airport at Nagpur to GMR that developed the Delhi International Airport,” he added.

Union minister for transport and shipping, Nitin Gadkari claimed that he laid foundation stones and inaugurated several projects worth ₹4-lakh crore within a week, this month. “This shows that our government is committed to development of the country.”

After inaugurating the service, Fadnavis and Gadkari also took a ride on the Metro.