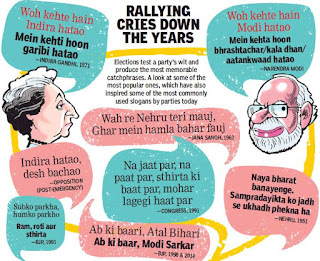 During the third Lok Sabha elections, a Poona-based newspaper reported that one of the Hindi slogans raised at a Jana Sangh procession was “Death to Pandit Nehru (Nehru ki maut)”. Members of Jana Sangh, the previous avatar of BJP, emphatically denied this, pointing out that the slogan was “Wah re Nehru teri mauj/ghar mein hamla bahar fauj”, which “pointed out the paradox of Nehru’s policy of sending the Indian army abroad when Indian frontiers were threatened”.

The 1962 incident mentioned in VM Sirsikar’s book, “Political Behaviour in India” (1965), shows how a poll slogan or its alleged misinterpretation could create a stir even in early 1960s India. After all, slogans encapsulate the distilled vision of a political party. They crisply communicate a party’s core stance. For instance, a photograph of the 1951-52 elections published in ECI’s book, “Unfolding Indian Elections”, shows a Congress poster with the face of Nehru and the phrase “Sthayi, asampradiyik pragatisheel rashtra ke liye (For a stable, secular and progressive nation)”, underlining what the party stood for.

A college student in 1951, Bhambri attended an election meeting addressed by Nehru in Kanpur’s Phool Bagh. “In his speech, he said, ‘Naya bharat banayenge (We will build a new India)’, and ‘Sampradayikta ko jadh se ukhadh phekna hai (We have to uproot communalism)’. The next day the Congress workers were shouting these lines in their processions,” says Bhambri, who taught at JNU.

In the 1950s, India’s literacy was 18%. Hence, the spoken word was more important than the printed word. In 1957, as a lecturer at a Meerut college, Bhambri again heard Nehru during the 2nd Lok Sabha polls. “Nehru said, ‘Humein chhalang marni hai (We must take a leap)’. We must end poverty and backwardness,” recalls Bhambri.

Unsurprisingly, the “Garibi Hatao” slogan had the maximum resonance among 36 slogans used by Congress in Delhi in the 1971 polls. The full slogan, translated from the Hindi, goes: “They say Indira hatao, Indira says, Garibi Hatao.” Twenty-four out of 81 prospective voters recalled this slogan in a poll carried out by Prayag Mehta for his book, “Election Campaign” (1975). Another 22 recalled the catchline “Vote for Socialism, Vote Congress”.

Slogans are also tweaked to capture the mood of the times. When the public turned against Indira post-Emergency, the Opposition reworked her 1971 slogan and produced the hugely popular exhortation “Indira Hatao, Desh Bachao”. When the Janata government imploded after infighting, Congress came up with the 1980 slogan, “Sarkar woh chune jo chal sakey” (Elect a government that functions).

The early 1990s saw the arrival of the coalition era. After National Front’s coalition government, which lasted from December 1989 to November 1990, parties felt that the people would like to vote for a stable regime. Consequently, there was an emphasis on stability in the campaign slogans.

For the same campaign, BJP had the line “Subko parkha, Humko parkho (You tried everyone, now try us)”. Another catchline went, “Ram, roti aur sthirta”, which underlined the party’s involvement with the Ramjanambhoomi movement.

Now, as the 2019 LS polls loom, parties are emerging with fresh slogans. BJP already has two: “Modi hai to mumkin hai” and “Phir ek baar, Modi Sarkar”. Reports say Congress is crowdsourcing catchlines from party workers and has received about 15 lakh slogans. Whose “achche din” they will usher in remains to be seen.