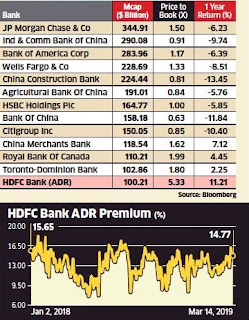 HDFC Bank crossed the $100-billion market capitalisation  based on the price of its American Depositary Receipts, is valued at more than the combined market value of Japan’s No.1 financial banking group, Mitsubishi UFJ Financial, and the top German lender, Deutsche Bank. Only banks in the US, China, the UK and Canada are now valued more than India’s largest private sector lender.

The premium between HDFC Bank’s ADRs and its locally listed shares has widened to 15% currently from 10-11% early this year. The rise in premium comes despite the rupee strengthening against the dollar. The local shares of HDFC Bank have gained 20% in the last one year, as against a 16% gain in Bank Nifty in the same period. According to Bloomberg data, 50 of the 54 analysts tracking the stock have a ‘buy’ rating on it, while three have a ‘hold’. One analyst recommends selling the stock.

However, HDFC Bank, which is currently trading at 5.33 times its latest annual book value against a global average valuation of 1.3 times, is an expensive stock among top 100 bank stocks in the world.