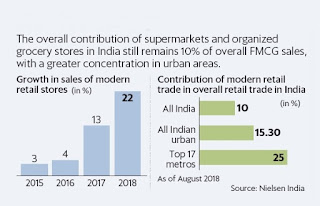 The switch to GST, acceptance of digital payments, and a consumer shift to convenience have helped push the sale of cheese, biscuits, hair conditioners, and packaged rice in modern retail stores in India for the year ended 31 August 2018. This has helped the country’s organized grocery stores register a strong 22% growth in sales, according to a report titled Reformatting Retail in India by insights firm Nielsen India released in March.

The market for fast-moving consumer goods sold through modern retail stores in India stood at ₹41,416 crore as of August 2018, Nielsen said.

The report measured the growth of such stores from August 2017 to August 2018, factoring in the impact of events such as demonetization and the transition to GST in 2017. “Demonetization and the introduction of GST became tailwinds for the sector by triggering the mass adoption of digital modes of payment by consumers,” the report said.

However, the overall contribution of supermarkets and organized grocery stores still remains 10% of overall FMCG sales “with a greater concentration in urban areas, particularly the top 17 metro cities”.

The last two years have been beneficial for large retail chains, as traditional retail dominated by small mom-pop or kirana stores were affected by policy changes. In 2017, the government’s move to implement the GST impacted small and medium wholesalers, which were already reeling under the impact of the government’s move to ban high currency notes in November 2016. These stores struggled to keep up with the lengthy compliance procedure required under the new tax system. As a result, supermarkets and grocery stores saw higher footfalls and reported better sales.

“Advance setting of systems, across both buying and selling, helped modern trade gain sizeable growth advantage over general trade during the implementation of GST,” the report said. In the same period, the number of organized grocery stores that Nielsen defines as “shops enabled with shopping a shopping cart, and have at least two such shops” stood at 18,197. In 2018, supermarkets grew 25%, while hypermarkets grew by 15%. Nielsen defines supermarkets as chain and stand-alone stores that have an area of less than 15,000 sq. ft and not more than nine point-of-sale counters. The rest, Nielsen defines as hypermarkets.

“In modern trade, per say, we’ve been seeing growth, be it in store count, be it in penetration, be it in footfall, as well as, what’s happening with the consumer,” said Ajay Macaden, head, retail, Nielsen India.

Such stores in smaller markets grew at a faster clip, Nielaisles, sen data suggests. Small and large organized stores in cities with a population of 100,000 to 500,000 grew three times compared with those in metros. “In smaller towns, it is more the case of small mom-pop stores trying to reinvent themselves,” Macaden said.

For large FMCG firms, the modern retail stores have been steadily improving and helping them sell more premium and valued-added products.