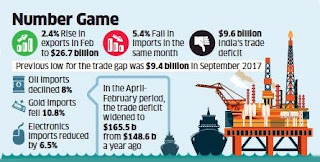 India’s trade deficit shrank to a 17-month low in February on a sharp fall in import of oil, gold and electronics, the items that form the bulk of the country’s import bill.

Exports rose 2.4% from a year ago to $26.7 billion, while a 5.4% contraction in imports led to a decline in the trade deficit to $9.6 billion, data released by the government on Friday showed. The previous low for the trade gap was $9.4 billion in September 2017.

The trade deficit was $14.7 billion in January and $12.3 billion in February of the previous year.

In the April-February period, the trade deficit widened to $165.5 billion from $148.6 billion in the yearago period.

The major commodity groups of export showing positive growth in February were organic and inorganic chemicals (4.1%), drugs and pharmaceuticals (16.1%), and ready-made textiles (7.1%), the ministry said.

In rupee terms, exports growth was 13.3% in February, with currency depreciation contributing to the rise. Imports denominated in rupee were up 9.8% in the month.

18 out of 30 sectors showed a decline in exports in December. Non-oil and non-gold imports fell 3.7% in the month, indicating weakness in domestic demand.