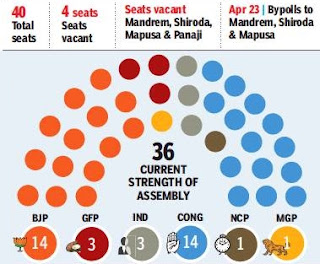 Midnight dramas are fast becoming a norm rather than an exception in Goan politics. If chief minister Pramod Sawant was administered oath in the early hours of the morning last week, Goa woke up on Wednesday to another midnight drama as BJP engineered a split in ally MGP with two of its three MLAs joining the saffron party. Sawant also sacked MGP leader Ramkrishna Dhavalikar, who served as deputy CM for less than a week.

Tourism minister Manohar Azgaonkar and Sanvordem MLA Deepak Pauskar joined BJP by announcing their decision in a letter to deputy speaker Michael Lobo at 1.45 am, thereby circumventing the anti-defection law that needs two-third of the legislative wing to break away.

Following the death of then CM Manohar Parrikar, when BJP got down to the business of government formation, there were talks that MGP would split and break away. With Dhavalikar eventually finding a place in the cabinet and getting the post of deputy CM, there appeared to be normalcy, until BJP stunned everyone with its post-midnight coup.

BJP now has 14 MLAs in the 40-member assembly, the same as opposition Congress. After Parrikar’s death, Congress had staked claim to form the government on the grounds that it was the single largest party.

Sources said Azgaonkar, who is likely to be appointed deputy CM, will retain his portfolios of tourism and sports, besides being given transport, previously held by Dhavalikar, who is now the lone MGP MLA in the House. His prime portfolio of PWD would be given to first-time minister Pauskar, who was sworn in late at night, sources said.

MGP reacted with anger, saying it would field candidates in all constituencies where bypolls are scheduled to be held along with Lok Sabha elections on April 23.

Goa Forward Party, which is now BJP’s lone ally, called into question the “credibility” of the government in the eyes of the public if BJP continues to engineer such defections.

The divorce was inevitable ever since MGP insisted on contesting from Shiroda despite giving an assurance to Union minister Nitin Gadkari that they would step aside from the fray.

In Shiroda, BJP has handed the ticket to Subhash Shirodkar, who quit Congress to join the party. MGP president Pandurang 'Deepak' Dhavalikar has been campaigning in Shiroda for almost six months now, and told BJP leaders that it was “too late” for him to withdraw from the fray.