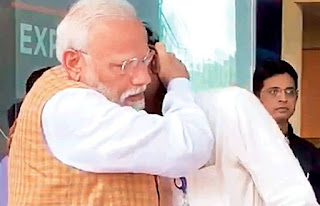 K Sivan, chairperson of the Indian Space Research Organisation, braced his team with a warning that “it is going to be 15 terrifying minutes” during the Moon lander Vikram’s scheduled landing. His words rang true after the spacecraft lost communication with ISRO during the last few minutes of the process.

Here is how the nail-biting 15 minutes unfolded:

1.38 am: Moon lander Vikram began its descent from an altitude of 30 km from the lunar surface at a velocity of 1,680 metres per second (m/s).

The rough braking operation began to kill the lander’s velocity.

1.50 am: The rough or brute breaking phase ended when the lander was at an altitude of about five km from the surface. The fine-breaking phase began.

The lander started to deviate from its plotted path at an altitude of 3 km. Vikram tumbled and regained its position.

2 am: The team awaited the results of the fine-breaking phase in silence.

2.07 am: The ISRO team turned on communication between the lander and Chandrayaan-2’s orbiter. Dr Sivan briefed Modi about the problem.

2.10 am: Sivan declared that ISRO had lost communication with the lander when it was 2.1 km away from its designated landing spot.

Communication links snapped soon after that.


India’s dream of landing on the moon may be unfulfilled. The mission, however, is far from over. As the country and the world rallied with the extraordinary effort put in by the Indian Space Research Organisation in launching Chandrayaan-2, the space agency held out hope to millions of Indians. The spacecraft has already accomplished 90 to 95 per cent of its mission objectives and that it would continue contributing to lunar science despite the loss of communication with the Lander, it said.

ISRO explained that the precise launch and mission management had ensured a long life of almost seven years instead of the planned one year for the orbiter.

India’s bold mission to soft-land on moon suffered a setback in the wee hours of Saturday as lander Vikram lost communication with ground stations, just 2.1 km from the lunar surface during its final descent.

“All the systems and sensors of the Lander functioned excellently until this point and proved many new technologies such as variable thrust propulsion technology used in the Lander,” ISRO said in an update.

The successful landing would have made India the fourth country after Russia, the US and China to achieve a soft landing on the moon, also the first to launch a mission to the unexplored south pole of the Moon.

Pointing out that the orbiter has already been placed in its intended orbit around the Moon, ISRO said, “It shall enrich our understanding of the moons evolution and mapping of the minerals and water molecules in the Polar Regions, using its eight state-of-the-art scientific instruments.”

Words of praise and encouragement poured in for ISRO from leaders across the political spectrum as they rallied around the space agency.

President Ram Nath Kovind said the country is proud of ISRO, which, he added, has shown exemplary commitment and courage.

While Modi, who had flown to Bengaluru to watch the touchdown, addressed scientists for nearly 25 minutes as he sought to lift their morale, other leaders, including Congress chief Sonia Gandhi, joined him in lauding them.

“We owe a great debt to ISRO and the brilliant men and women who staff it,” said Gandhi. “Their hard work and dedication has earned India a place in the league of space-faring nations and have inspired generations to reach for the stars.”

Defence Minister Rajnath Singh quoted a line of a Hindi poetry to state that “those who try never lose”.

In a gesture that in many ways defined the mood of the moment, Modi hugged an emotional K Sivan, the ISRO chief, and was seen consoling him during their meeting in the morning after it became clear that the mission had suffered a setback.

“Effort was worth it and so was the journey. It will make us stronger and better. There will be a new dawn and better tomorrow... I am with you, nation is with you,” Modi said.

Rahul Gandhi lauded ISRO scientists for their “incredible work” and said they have laid foundation for more path-breaking and ambitious space missions in future.