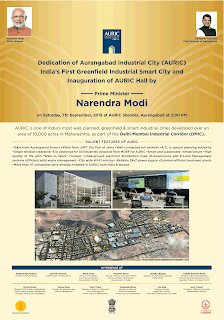 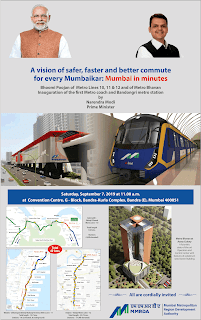 Prime Minister Narendra Modi inaugurated the country’s first greenfield industrial smart city, Auric City, at Shendra in Aurangabad. Projected to attract around Rs.70,000 crore in investments on completion, the mega project is part of the upcoming Delhi-Mumbai Industrial Corridor and is expected to boost the overall development of an otherwise parched Marathawada.

Auric City is also touted to be the country’s first ‘walk-to-work’ smart industrial city which will encourage housing options, workplaces, and shopping centres, to be developed in the vicinity of each other.

Inaugurating the administrative headquarters of the smart city – Auric Hall –from where the entire industrial city and its facilities will be operated, PM Modi said Aurangabad is not only becoming a new smart city but will also become a centre of the nation’s industrial activities, creating lakhs of jobs once fully operational.

Dedicating it to the nation, he said, “In the new-age digital era ecosystem, requirements of businesses are rapidly evolving and such businesses which frame their value proposition on smart technologies, it makes sense to provide them a comprehensive ecosystem that itself is smart.”