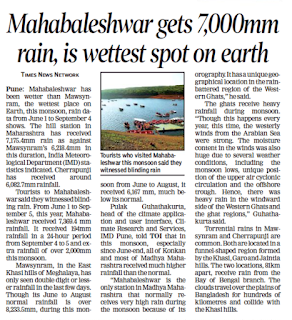 Mahabaleshwar has been wetter than Mawsynram, the wettest place on Earth, this monsoon.

The hill station in Maharashtra received 7,175.4 mm rain as against Mawsynram's 6,218.4mm from June 1 to September 4, data with the India Meteorological Department (IMD) shows. Cherrapunji received around 6,082.7 mm rainfall in the same period.

Tourists to Mahabaleshwar said they have witnessed blinding rain. The hill station outperformed Cherrapunji, the second wettest place in the world, last year.

Mawsynram, in the East Khasi hills of Meghalaya, has only seen double digit or lesser rainfall in the last few days. Though its normal June-August rainfall is over 8,233.5 mm, it received 6,167 mm during this period this monsoon, much below its normal.

Pulak Guhathakurta, head of the climate application and user interface, Climate Research and Services, IMD Pune, said that during this monsoon, especially since June-end, all of Konkan and most of Madhya Maharashtra received much higher rainfall than normal.

“Mahabaleshwar is the only station in Madhya Maharashtra that normally receives very high rain during the monsoon because of its orography. It has a unique geographical location in the rain-battered region of the Western Ghats,” he said.

The ghats receive heavy rainfall during monsoon. “Though this happens every year, this time the westerly winds from the Arabian Sea were strong. The moisture content in the winds was also huge due to several weather conditions, including the monsoon lows, unique position of the upper air cyclonic circulation and the offshore trough. Hence, there was heavy rain in the windward side of the Western Ghats and the ghat regions,” Guhathakurta said.

Torrential rains in Mawsynram and Cherrapunji are common. Both are located in a funnel-shaped region formed by the Khasi, Garo and Jaintia hills.

The two locations, 81 km apart, receive rain from the Bay of Bengal branch. The clouds travel over the plains of Bangladesh for hundreds of kilometres and collide with the Khasi hills.

“The hills have numerous deep valleys and channels. Strong winds push these clouds through the deep valleys and lift them up. The upward motion helps water vapour condense, increasing the moisture content in the winds. When these winds saturated with moisture collide with the Khasi hills, extremely heavy rain occurs over the windward side, where Mawsynram and Cherrapunji are located,” Guhathakurta said. 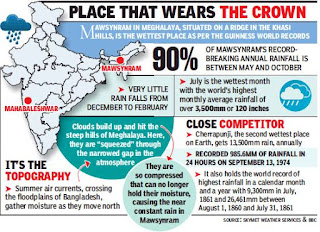