Prime Minister Narendra Modi hit out at Pakistan for its support to terrorism and said India’s decision to nullify Article 370 has caused trouble to those who cannot handle their country as he called for a decisive battle against terrorism. Making a strong pitch against terrorism at the ‘Howdy Modi’ event in the presence of US President Donald Trump, who joined the mega event in a rare gesture of friendship, Modi asked crowd to give Trump a standing ovation, as he targeted Pakistan and its Prime Minister Imran Khan, without directly naming them.

“Article 370 encouraged terrorism and separatism in Jammu and Kashmir,” he said, asserting that its nullification will allow development and prosperity in the region and end discrimination against women, scheduled castes and scheduled tribes.

“Where do you find conspirators of 9/11and 26/11terror attacks,” Modi said, referring to terror attacks in the US and Mumbai and called for a “decisive battle” against terrorism.

Earlier, Trump said border security is vital to both America and India as he emphasised on bolstering further the Indo-US security relationship, vowing to protect innocent civilians from the threat of radical Islamic terrorism and Trump said the two countries will soon sign several defence deals to bolster their relationship.

“We are committed to protect innocent civilians from the threat of radical Islamic terrorism,” the US president said. 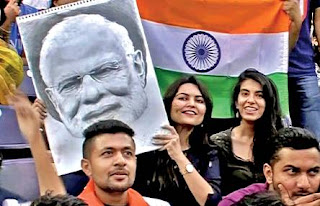