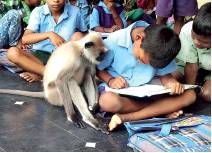 Lakshmi, a female langur which became famous for regularly attending classes at a government school in Andhra Pradesh’s Kurnool district, was killed by stray dogs on Saturday.

The school declared a half-day holiday to mourn the death of the langur. The two-year-old monkey used to attend classes regularly and sit beside students at a government primary school at Vengalampalli village of Peapully block. The students named it Lakshmi.

According to school principal Syed Abdul Lateef Khan, Lakshmi went out of the school compound during the lunch hour, when stray dogs attacked it.

Teachers said that Lakshmi usually had lunch along with the children. The kids used to bring bananas and fruits for it.

Hearing its screaming and barking of dogs, teachers and students ran out of the school compound to rescue it but they couldn’t save it.

The langur, along with two others, had strayed into the school from the nearby forests in July. The other two were killed in an accident with cement trucks. Lakshmi had a quiet and docile temperament so the students started liking it. It ate everything they offered and used to stay in the school premises, which had trees, at night as well. Initially, the teachers did not allow Lakshmi in the classrooms. She used to sit on the grill and follow the lessons. However, they relented soon.