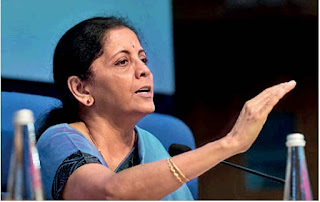 In the biggest reduction in 28 years, the government slashed corporate tax by almost 10 percentage points as it looked to pull the economy out of a six-year low growth and a 45-year high unemployment rate by reviving private investments with a Rs.1.45-lakh crore tax break.

Two-and-a-half-months after presenting her maiden Budget that was hailed as “development-friendly” and “future-oriented”, finance minister Nirmala Sitharaman announced cutting corporate tax rate to 25.2 per cent to bring them at par with other Asian countries such as China and South Korea but at the expense of potentially breaching the 3.3 per cent fiscal deficit target.

Markets cheered the announcement with the BSE Sensex jumping by the most in a decade while the rupee also climbed against the US dollar.

This will be subject to the condition that these companies will not avail any other incentive or concession such as tax holiday enjoyed by units in Special Economic Zones and accelerated depreciation.

The effective tax rate for existing units, after considering surcharges and cess such as Swachh Bharat cess and education cess — which are levied on top of the income and corporate tax rates, will be 25.2 per cent as compared to 34.94 per cent now. For new units, it will be 17.01 per cent as against 29.12 per cent now.

The new tax structure, which will lead to government losing Rs.1.45 lakh crore in revenue annually, is effective from April 1, 2019, and will bring Indian corporate tax rate at par with Asian peers in a bid to attract investments.

Praising Sitharaman’s announcement of rationalisation of corporate tax for domestic companies, Prime Minister Narendra Modi said on Friday that the step would help attract private investments from across the globe besides creating jobs.

Describing the decision as “historic”, the Prime Minister tweeted, “The step to cut corporate tax is historic. It will give a great stimulus to #MakeInIndia, attract private investment from across the globe, improve competitiveness of our private sector, create more jobs and result in a win-win for 130 crore Indians.”

In another tweet, Modi said that the recent announcements show the government’s efforts to ease the business environment in India.

“The announcements in the last few weeks clearly demonstrate that our government is leaving no stone unturned to make India a better place to do business, improve opportunities for all sections of society and increase prosperity to make India a $5 trillion economy,” he said.

In her first budget presentation in July, Sitharaman announced the government’s target of making India a $5 trillion economy by the year 2024-25.