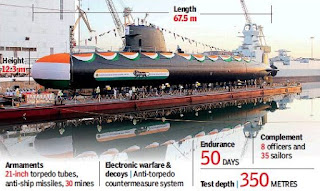 India's second Scorpene-class submarine, INS Khanderi, built for superior stealth and launching crippling attacks on the enemy using precision-guided weapons, was delivered to the Navy. Made by Mazagon Dock Shipbuilders Limited, it will be commissioned at Naval Dockyard by defence minister Rajnath Singh on September 28.

The submarine inherits its name from a predecessor that served in the Navy during 1968-89 and was christened after Chhatrapati Shivaji’s island fort of Khanderi. An inspiration is also the wide-snouted saw fish, a deadly predator of the Indian Ocean which bears the same name.

INS Khanderi is among MDL’s six such submarines. The first, INS Kalvari, was commissioned by Prime Minister Narendra Modi in December 2017. “Scorpeneclass submarines can undertake multifarious tasks, including anti-surface and anti-submarine warfare,” a MDL spokesperson said.

A contract with French company Naval Group (earlier called DCNS) was signed in 2005 for the supply of six submarines. The French-designed subs are being built by MDL as part of Indian Navy’s Project-75, which has witnessed significant delays and cost escalation.

On September 28, the defence minister will also launch INS Nilgiri, the first ship of the P17A frigates.