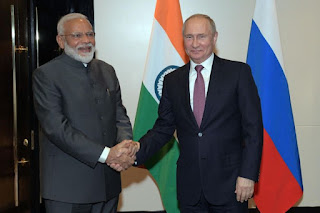 For the development of (Russia’s) Far East, India will give a line of credit worth $1 billion,” Narendra Modi announced in Vladivostok this week, an inversion of global perceptions that is nothing short of staggering.

It provides a unique window to the India-Russia relationship that has endured the end of the Cold War and holds a special place in every Indian government’s heart. For the first time, India has moved its gaze eastwards from Moscow towards the energy- and mineral-rich regions in Russia’s Far East. It is the most ambitious move to diversify the India-Russia basket away from defence.

If properly implemented (a necessary caveat in both Moscow and New Delhi), India would be able to access new energy sources to reduce its Middle East dependence. A new maritime route from Chennai to Vladivostok with Arctic access is a big takeaway from the Modi-Putin fest this week, because, among other things, it creates connectivity in areas India hadn’t explored earlier. It has strategic implications for India expanding its maritime footprint to northeast Asia.

Whether articulated or not, this will give Russia an opportunity to diversify from China as well. Russia has been worried about the growing presence of China in its Far East. If Indians are allowed in (Foreign Secretary Vijay Gokhale said manpower movement was part of the new deal) as well as Indian businesses, it could offset the demography change that Russia is concerned about. It’s not only India. The Eastern Economic Forum saw not only Modi holding Putin’s hand, but Shinzo Abe also. Abe, like Modi, has increased political and economic interest in Russia, because both countries want to give Moscow an option to balance its dependency on Beijing. Japan too has been trying to get Vladimir Putin around to sign a peace agreement, and maybe settle the islands dispute.

Will that be enough to wean Russia away? Tough. At least, the numbers don’t favour that argument. And Putin is not convinced yet. India would, for instance, like the western world to re-admit Russia — Russia’s sense of self comes not from being an Asian power but a European one. However, apart from Donald Trump and Emmanuel Macron, no one is listening.

It’s nice to believe Russia will welcome Indian workers and businesses; for decades, the lack of Russian business visas to Indians has been a major issue between the two countries. However, last month, Deepak Bagla of Invest India told a Moscow audience that he was now seeing a significant uptick in Russian business interests in India — almost 47 companies in 11 sectors over the past 24 months.

What we can see is a determined broadening of the India-Russia relationship. The traditional elements are still there — defence, nuclear, etc — but they are on a downward trajectory. India decided a few years ago to start with a $5 billion investment in Russia’s energy sector. Minerals, natural resources like timber and rare earths, and diamonds will occupy a greater space in the Indian basket. That investment is bearing fruit. Russia knows, as does India, that India’s defence buys will go down, S-400 and n-submarine lease notwithstanding. Putin promised an extra 12 nuclear reactors, but someone please explain why the functioning Kudankulam reactors are producing less, suffering repeated outages and are not considered a reliable source of power by the Tamil Nadu electricity facility. Sooner or later, the Indian government will have to take tough decisions on this, and they know it. The diversification to hydrocarbons is therefore much needed, particularly as low oil prices for a few years now have dealt a body blow to the Russian economy.

The Russia relationship holds a lot of promise yet, it just has to be in newer areas. “There are a lot of possibilities. Till now, the full potential has not been realised. The speed has been low,” said Modi in Vladivostok.

Russia and India continue to be far apart on Afghanistan, but even Moscow is beginning to contemplate the dangers of the Taliban in Kabul. That might open possibilities with India.

Moscow has been persuaded to take the correct line on Kashmir and Article 370, though it strayed slightly at the UN Security Council. That shows Russia is also learning that standing by its old ally, India, is no longer negotiable. It speaks to India’s credit that despite the realities of its growing ambitions, India has not left Russia’s side.

In the Indo-Pacific, Russia is an outlier, because, like China, Russia is sceptical about this project. In Moscow recently, Foreign Minister S Jaishankar told the influential think tank Valdai Discussion Club, “India is a strong power in the Indian Ocean with a serious interest in the Pacific Ocean, Russia is a strong Pacific power with an interest in the Indian Ocean. How can we harmonise these interests — that’s the matter. We have such experience in the Eurasian space. It is important today to see where our interests in maritime cooperation can be translated into real interaction.”