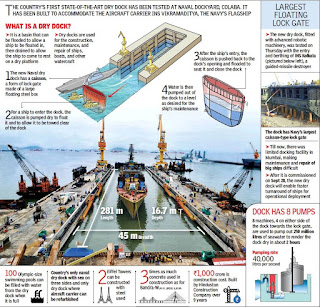 The country’s first state-of-the-art dry dock, which was successfully tested yesterday with the warship INS Kolkata, will be commissioned on September 28.

Naval officers said the dock will be dedicated to the Indian naval command and has the capacity to dock the aircraft carrier, INS Vikramaditya, for repair and maintenance, not to speak of nuclear submarines. With a length of 281 metres, width of 45 metres and depth of close to 17 metres—almost equivalent to a five-storey building—the dry dock is nothing short of a construction marvel.

“It will not only reduce vessel maintenance expenses that the Navy incurs at private shipyards, but will also enhance defense capability to load advanced arms and ammunition onto out premiere warships,” said an officer.

The dock, equipped with robotic machinery, can overhaul ships in quick succession. It has a facility to enable container trucks carrying ship spare parts to station themselves along repair bays, so that engineers don’t have to waste time procuring the parts from a distance.

The nine-year construction of the dock was preceded by a major operation to remove sunken ships and barges from the site, as well as the removal of bedrock to accommodate the massive structure, which comprises fit-out berths, caisson (a type of lock gate that is opened for a ship's entry into the dock) and a cofferdam.

Unlike the country’s other dry docks, the new one is built out into the sea and is surrounded with saline water on three sides. The other docks are landwards and only open into the sea.