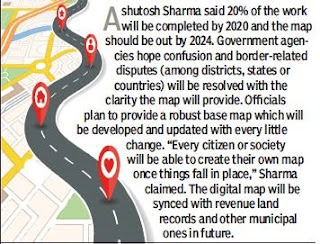 An ambitious drone-based digital mapping project is under way to create a more accurate and realistic view of every nook and corner of the country.

Work on the project began in Karnataka, Haryana, Maharashtra and the Ganga basin a few months ago. The project is being undertaken by Survey of India, with the support of department of science and technology and inputs from several government agencies like Archaeological Survey of India and Forest Survey of India.

According to Ashutosh Sharma, secretary, DST, the map will have a higher resolution than that of Google Maps. Such a project is being executed on such a large scale for the first time after almost two centuries when British surveyors Colonel Sir George Everest and his predecessor William Lambton first scientifically mapped the country in 1767.

“Digital mapping has never been done. This comprehensive map will show the exact state, district and country boundaries,” Sharma told mediapersons at Indian Institute of Science.

He said five years ago, the gargantuan project would have cost the government Rs.10,000 crore but is now expected to be completed at Rs.1,000 crore with deployment of far more advanced technology.

“We have picked the states based on their enthusiasm for the project. For instance, Haryana will fund it completely and for the Ganga basin, Namami Gange agency will share the cost. Several agencies have come forward with contributions for the project,” Sharma explained.

The map will be available in the public forum with features highlighting hospitals, canals and other minute details. Survey of India has set reference points called Continuously Operated Reference Stations networks at intervals of 20 km across the country, which increase the accuracy by 10 times as well as provide instant online 3D positioning, Sharma said.

With several organisations involved in the mapping endeavour, extensive groundwork will be done to match the aerial findings of drones, he added.

“Citizens will be able to make informed choices while buying properties. The map will help them understand where the property is located and its accessibility, among several other key details,” he said.