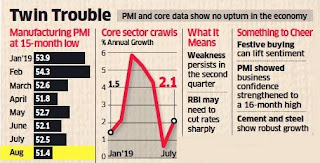 Manufacturing activity in India slumped to a 15-month low in August as sales slowed, forcing factories to cut back on production.

The IHS Markit India Manufacturing PMI fell to 51.4 in August from 52.5 in July, its lowest since May 2018 and below its long-run average of 53.9. However, it remained above the 50-point mark that separates expansion from contraction. PMI stands for purchasing managers’ index.

The index of eight core industries, which measures output in eight infrastructure industries, rose 2.1% in July, ahead of 0.7% in June. This index has a 40% weight in the Index of Industrial Production, suggesting modest industrial growth in July. Data released on Friday showed the Indian economy grew 5% in April-June period, the lowest in 25 quarters.

New business continued to flow in, but August saw the rate of expansion ease to a 15-month low, the survey said.

Manufacturing output grew at the slowest in a year and job growth remained marginal despite output expansion.

In the last two weeks, the government has announced a number of measures including consolidation of public sector banks and capital infusion in them besides a relaxation in foreign investment norms and steps to ease credit flow to reverse the slowdown.

Oxford Economics said India’s full-year growth could slip below 6% in 2019 and expects a further cut of 75 basis points in the benchmark interest rate by the Reserve Bank of India. The RBI has already cut interest rates by 110 basis points this year in order to shore up growth. One basis point is one-hundredth of a percentage point.

The country’s largest car manufacturer Maruti Suzuki posted a 35.9% decline in sales in August in yet another dismal month for most automakers.

Still, producers remained optimistic in August, expecting an increase in demand as well as marketing efforts to support output growth, according to the survey.