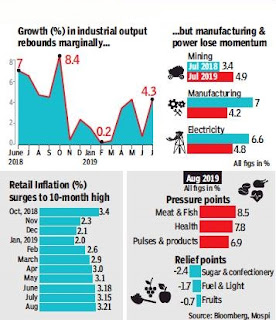 India's industrial output growth posted a muted rebound in July and retail inflation inched up marginally in August, prompting economists to say that the Reserve Bank of India will cut interest rates when it reviews monetary policy next month to revive growth which has slumped to a six-year low in the April-June quarter of the current financial year.

Industrial output rose to a two-month high of 4.3% in July, higher than downwardly revised 1.2% in June and lower than 6.5% in the same period last year. The latest data set comes against the backdrop of a slowdown in the economy and mounting criticism of the government’s handling of the situation. The Centre has unveiled a string of measures to counter the slowdown impact and more steps are in the pipeline to boost growth.

The data showed manufacturing sector grew a sluggish 4.2% compared to 7% in July 2018. The capital goods sector, which is a key gauge of industrial activity, contracted for the second consecutive month and declined by 7.1% in July compared to an expansion of 2.3% in the same month last year. The consumer durables sector contracted by 2.7% compared to a growth of 14.1%.

Separate data released by the NSO showed inflation as measured by the consumer price index rose to a 10-month high of 3.2% in August, nearly similar levels of 3.1% in the previous month led by a surge in food and vegetable prices. Food prices rose to a 14-month high in August, largely driven by vegetable prices, influenced by some disruption in supplies due to floods in some parts of the country. This was the 13 consecutive months when retail inflation remained below the RBI’s comfort zone. 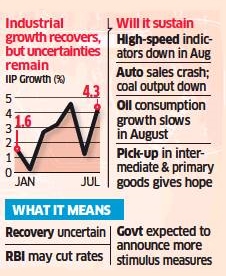