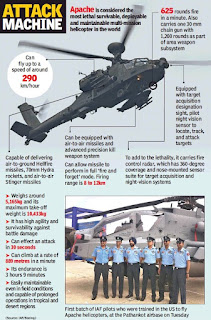 The Indian Air Force inducted the first batch of eight Apache helicopters at the Pathankot airbase.

Codenamed AH-64E, the Apaches have a spectrum of capabilities required for any mission. The new fleet of Apache helicopters will be part of 125-Helicopter squadron, popularly called “Gladiators” of the IAF.

Chief of Air Staff, Air Chief Marshal B S Dhanoa, said on the occasion that Apache is one of the fiercest helicopters in the world with a capability to fire and forget and launch air-to-air missiles. Salil Gupte, head of Boeing India, handed over the symbolic key of the Apache helicopter to Dhanoa, who was the chief guest at the induction ceremony. Gupte said the Apaches have been customised for the operational requirements of the Indian forces.

Addressing the gathering, Dhanoa said Apaches are being purchased to replace the aging Mi-35 fleet, which have been used by the IAF for over three decades. “Alongside the capability to shoot, fire and forget anti-tank guided missiles, air-to-air missiles, rockets and ammunition, Apache has modern electronic warfare capabilities to provide versatility in a network-centric aerial warfare,” he said. The new flying machines have been deployed at the Pathankot airbase, which was targeted by terrorists in January 2016. It is one of the most strategic forward airbases of the IAF, during war as well as in peacetime surveillance.

The station is not only a defensive airfield, considering its proximity to Pakistan, it is also a vital airbase for tactically offensive operations.

The Apaches reached India on July 27 in a semi-knocked-down condition. However, the helicopters were formally handed over to the IAF on May 10, at a ceremony held in the US.

Select aircrew and ground crew have trained at the headquarters of the US Army Aviation at Fort Rucker in Alabama. These IAF personnel are now leading the operationalisation of the Apache fleet in IAF. IAF officials said the helicopter has been customised to suit IAF’s future requirement and would have significant capability in mountainous terrains. The helicopter has the capability to carry out precision attacks at standoff ranges and operate in hostile airspace with threats from ground.

“The ability of these helicopters, to transmit and receive battlefield pictures, to and from the weapon systems through data networking makes it a lethal acquisition. These attack helicopters will provide significant edge in any future joint operations in support of land forces,” said Air Marshal AS Butola, a senior IAF officer who represented the country in acquiring the Apaches from the US. The Apaches are presently being used by the US and 18 other armed forces of the world.

The induction of the Apaches will enhance the capability of IAF in providing integrated combat aviation cover to Army strike corps. The IAF has signed a contract with Boeing and the US government for 22 Apache attack helicopters.