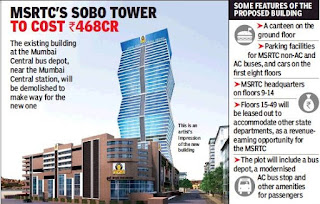 A Rs.468-crore project to build a plush commercial tower at the MSRTC’s present HQ at Mumbai Central was launched on Thursday. State transport minister Diwakar Raote, the man behind the move, spoke to the media after the bhoomipujan.

His proposal calls for the first eight floors of the new building, which will cover a carpet area of 1.23 lakh sq m, to be used for parking and floors 9 to 14 to be earmarked for MSRTC offices and a headquarters for the bus corporation. Floors 15 to 49 will be given on lease to various government departments.

At present, MSRTC buses do not have adequate space for parking, so the planned eight parking levels will be a great advantage. A senior MSRTC official said that while the architectural plan for the new building was ready, the developer/builder was yet to be finalised.

An MSRTC spokesperson said the project will be executed with funds from the state transport corporation. “We will fund all expenses, and in the long run plan to recover the Rs.468 crore in 29 months,” he said, adding that the corporation hopes to earn Rs.16 crore every month by leasing out offices on higher floors.

Sources said that MSRTC plans to transform its passenger facilities to be at par with those at T2 airport. “We want to give passengers a state-of-the-art facility, so they can have good experiences before boarding our buses,” an official said.