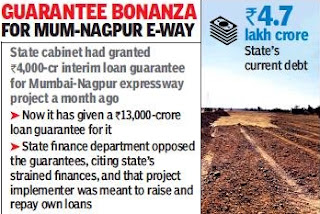 The cash-strapped Maharashtra government has cleared a Rs.13,000-crore loan guarantee for the Mumbai-Nagpur expressway project despite strong objections by the state finance department. This comes just a month after the state’s decision to underwrite a Rs.4,000-crore interim loan for the same project, which too had been opposed by the finance department.

The department resisted the demand for the loan guarantees citing the state’s strained finances and pointing out that the entity implementing the project was meant to raise and repay its own loans. The public works department, which sent the proposal to the cabinet, argued that lenders were demanding a state guarantee. The state is currently saddled with a massive debt of Rs.4.7 lakh crore.

The 701-km expressway, called the Maharashtra Samruddhi Mahamarg, will connect Mumbai to Nagpur and run through ten districts. It is one of chief minister Devendra Fadnavis’s pet projects and is being implemented by a special purpose vehicle called the Mumbai-Nagpur Super Communication Expressway, in which the Maharashtra State Road Development Corporation holds majority stake.

The project, estimated to cost Rs.55,335 crore, has not yet achieved financial closure although tenders have been awarded and work has begun. The SPV is in the process of raising loans worth Rs.28,000 crore and has been asked to complete financial closure for the project before September 15.

The finance department said that given the state’s existing financial obligations to schemes and infrastructure projects, it would not be correct to underwrite the Rs.13,000-crore loan. The department also said that its commitment to the project was limited to Rs.6,396-crore worth of interest during construction. It said that according to the concession agreement, the SPV was meant to raise its own loans for the project and repay these with the revenue generated from the expressway. Hence the need to give a state guarantee for the SPV’s loan did not arise. MSRDC’s managing director Radheshyam Mopalwar said that all MSRDC projects were guaranteed by the state government and he was not aware of any such agreement. He also said that revenue generation for the project would only begin only after it started operations.

The finance department also raised the concern that once the guarantee was granted, the SPV could seek state guarantees for loans received earlier by the project and this needed to be examined. The PWD has apparently argued that in such a case, a fresh proposal would be mooted.