India will have Jurisdiction Over PoK One Day: Jaishankar 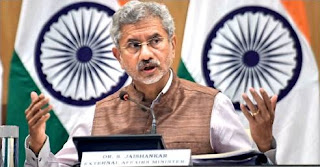 India made it clear that Pakistan-occupied Kashmir is a part of the country and New Delhi would have “physical jurisdiction over it” one day. “Our position on PoK has always been and will always be very clear. PoK is a part of India and we expect one day that we will have physical jurisdiction over it,” external affairs minister S Jaishankar asserted while addressing a press meet on the occasion of 100 days of the Modi government.

New Delhi has maintained that henceforth talks with Pakistan would be only about PoK and not on Kashmir. Defence minister Rajnath Singh and Vice President M Venkaiah Naidu have made statements in this regard in the recent past after Pakistan sought to internationalise the Kashmir issue.

The foreign minister made it clear that any meeting between Indian and Pakistani PMs on the sidelines of UNGA is not possible in the current climate.

This was Jaishankar’s maiden press meet after being appointed as the external affairs minister. In an obvious reference to Pakistan, Jaishankar said: “We have a unique challenge from one neighbour and that would remain a challenge until that neighbour becomes a normal neighbour and acts against cross-border terrorism.”

The minister claimed India’s narrative on issues like cross-border terror, Article 370 has been articulated to a global audience and India’s voice is now heard much more on the global stage. “Our ability, appetite to shape the foreign agenda today is much more than before.”