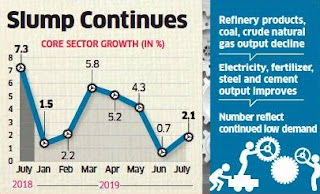 While growth as recorded by the Index of Eight Core Industries was higher than an over four-year low of 0.2% in June, it was lower than 4.4% recorded in July 2018.

The eight core industries of coal, crude oil, natural gas, refinery products, fertilisers, steel, cement and electricity, which have a 40.27% weight in the Index of Industrial Production, grew 3% in the April-July period compared with 5.9% in the year-ago period.

Last week, official data showed India’s GDP expanded at 5% in the first quarter, the slowest pace in over six years.

Coal and crude oil output declined by 1.4% and 4.4%, respectively, in July from a year earlier, while natural gas and refinery product output fell by 0.5% and 0.9%, respectively. Cement output increased by 7.9% and steel production increased by 6.6%, the commerce and industry ministry said.

The RBI has already cut interest rates by 110 basis points this year. One basis point is one-hundredth of a percentage point. 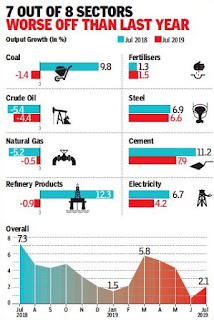