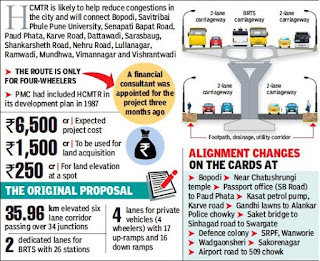 Pune Municipal Corporation’s general body on Monday approved a proposal to change the alignment of the High Capacity Mass Transit Route. PMC’s commissioner had tabled the proposal in front of the body, asking for changes in alignment at 11 spots.

Opposition leaders initially opposed the move, stating that the way it was being brought to the body was against the norms and that the approval of a committee is needed. However, they eventually chose to support it. The proposal will now be open for suggestions and objections.

PMC members from the ruling party have been trying to get the HCMTR project off the ground before the Assembly polls. However, with the realignments proposed, the proposal had to be tabled in the general body meeting of PMC for approval.

According to the proposal, of 11 changes proposed, four are major changes while seven are minor. While there were two different routes proposed initially in the Balbharati and Paud Road stretch with Balbharati-Paud Road being one, and HCMTR being other, the two have now been merged with the alignment of HCMTR changed to Balbharati Paud road. The alignment at the Wanawadi SRPF section has also been changed since there was ammunition godown coming in the way. The alignment in Vishrantwadi section has also been changed. Initially, the route passed through a restricted zone under the Indian Air Force. That route passed through Dattawadi. It has now been realigned to Patwardhan Baug in Erandawane and will be connected to Sinhagad Road from there. Along with this, minor changes have been done citing protests, availability of land in areas where a heritage sites were being disturbed, like Gandhi lawns, Vadgaon Sheri, Dunkirk Lines and so on.

Justifying the need for the changes, Anniruddha Pawaskar, head of road department, PMC, said, “When we surveyed the alignment in detail. There were few defence establishments and government buildings in the way. At some places there were security concerns while in some, many houses were getting affected where rehabilitation would’ve been needed, increasing the project cost. When meetings were conducted with these people, the need to change the alignment was felt. Hence, we have tabled this.”

Opposition leaders, however, created ruckus, claiming that the way the proposal is tabled was illegal. The leaders stated that such proposals needed to be approved by the committees in PMC and hence, couldn’t be discussed on Monday. Since the city improvement committees meeting was to be held on Monday, they asked why it wasn’t tabled in the meeting and approved, if it was so important. Saying that the meeting was adjourned due to lack of quorum, they also criticised the BJP for not having control over its corporators.

However, leader of the house, Shrinath Bhimale, urged the body to approve the proposal on a priority basis. He said, “If we don’t decide today there would be a delay of 3 months due to code of conduct. Hence we approve it today.”

Congress leader Arvind Shinde said, “We had spoken about this earlier as well. There was city improvement meeting to be held today. But it wasn’t done. Why couldn’t they manage to do it if the topic was important? We need clarity on many aspects. Now that you’ve proposed the alignments, do we now consider that no one else will be affected? Will there be no rehabilitation done? Multiple projects are proposed on same stretch. For instance, on Sinhagad Road, a flyover is proposed and now HCMTR. Does this mean that the flyover is scrapped?”

Dilip Barate, leader of the opposition, said “Commissioner informed members of the ruling party but ignored opposition leaders. This isn’t the way to do it.”

However, later they came around to supporting the proposal.