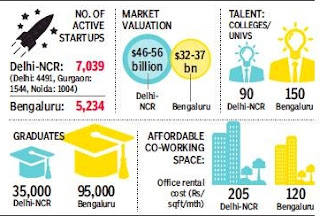 Bangalore is India’s Silicon Valley, but here’s the surprise: Delhi, Gurgaon and Noida — collectively, Delhi-NCR — together are far ahead in the number of startups they are home to. Another reason to call the National Capital Region India’s startup capital region is that it is home to the highest number of unicorns — companies valued at over $1 billion — which underlines the economic might it possesses.

Delhi alone, with 4,491 startups, is well ahead of Mumbai while Gurgaon (1,544), the magnet around which Delhi-NCR’s corporate world revolves, has more startups than Chennai and is almost equal to Pune. Noida, where mobile payments firm Paytm is based, has over 1,000 startups and is catching up with the others fast. In terms of the total startup valuation in India, Delhi-NCR’s contribution is almost 50%. The report, titled ‘Turbocharging the Delhi-NCR Startup Ecosystem’, has been prepared by The India Entrepreneur network along with Zinnov, a Gurgaon-based management consulting firm.

Commenting on the findings, Rajan Anandan, MD of Sequoia Capital, India and TIE’s Delhi-NCR president, said the numbers had come as a surprise to them as well. “NCR is the strongest in consumer tech and services startups with real potential to make it to the top five globally in terms of the startup ecosystem and activity,” said Anandan. According to the report, NCR — home to the likes of Zomato, Oyo and Rivigo — has 10 unicorns, followed by Bangalore with nine. Mumbai has only two.

“The most interesting part is that beyond these 10 unicorns, NCR also has another 10 soon-to-be unicorns and once they touch the $1-billion mark, it will be very difficult for any other city to beat NCR in this area,” Kant said.

Delhi-NCR also has three of India’s four most valuable listed internet companies — Info Edge, MakeMyTrip and indiaMART. “It is quite motivating for budding entrepreneurs like me to know that Delhi has such a strong startup ecosystem. When you see so many companies touching the unicorn mark, you also get inspired and motivated to reach there,” said Meghna Saraogi, founder of Styledotme, a Gurgaon-based startup. But the success story of Delhi-NCR hasn’t quite led to organic growth in its support system where Bangalore is still the best-placed city.