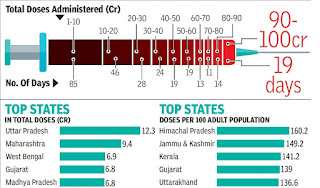 India achieved a major milestone in its battle against Covid-19 as cumulative vaccinations in the country crossed the 100 crore mark on Thursday. After China, which has administered over 200 crore doses, India is only the second country to have reached the landmark of 100 crore jabs.

While it took India a total of 202 days to reach the 50 crore landmark after it began giving shots, it took the country just 76 days more to reach the 100 crore milestone. A record 2.5 crore doses were administered on September 17, 2021.

In cumulative numbers too, India ranks second to China in fully vaccinating over 28 crore of its population, at least 10 crore more than the US and equal to the fully immunised population of Japan, Germany, Russia, France and the UK put together.

The ASI lit up 100 monuments in tricolour to mark the milestone as a tribute to health workers, frontline workers, scientists, vaccine manufacturers and citizens who bravely fought the pandemic.

Commemorating the achievement, banners were put up at some central government hospitals and refreshments were distributed among the hospital staff and beneficiaries who had come for vaccination. Besides that, some mobile networks caller tunes mentioning completion of 100 crore doses was also introduced.

Calling the achievement historic, Prime Minister Narendra Modi hailed doctors, nurses and all those who had worked tirelessly to enable this moment. “India scripts history. We are witnessing the triumph of Indian science, enterprise and collective spirit of 130 crore Indians. Congrats India on crossing 100 crore vaccinations. Gratitude to our doctors, nurses and all those who worked to achieve this feat. #VaccineCentury”,” the PM said in a tweet.

“To counter the largest pandemic in 100 years, the country now has a strong protective shield of 100 crore vaccine doses. This achievement belongs to India and its citizens,” said the PM as he inaugurated the Infosys Foundation Vishram Sadan at the National Cancer Institute in the Jhajjar campus of AIIMS via video conferencing.

In a statement on Twitter, home minister Amit Shah highlighted that “the milestone has re-acquainted the whole world with the immense capabilities of New India.” He thanked all scientists, researchers and health workers who have contributed in this task by overcoming many challenges.

During the course of the day many cabinet ministers joined in as they issued congratulatory messages and thanked the scientists and medical fraternity for enabling the one billion milestone.